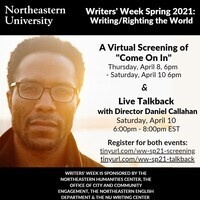 Join us for a live Talkback with Director of Come On In, Daniel Callahan.

Daniel Callahan is a transmedia artist and designer whose work merges various disciplines including but not limited to film, music, photography, painting, performance and digital collage to transcend medium and create immersive experiences that explore human resiliency and mysticism.

He is best known for his art technique of MassQing; a ritual painting that uses the human face as a canvas to reveal rather than conceal one’s essence and/or state of being. Daniel received his Bachelors of Arts and Science from the UPenn School of Design and his Masters of Fine Arts in Film and Video from Emerson College. He and his work have been featured at the Museum of Fine Arts, The Isabella Stewart Gardner Museum, the Institute of Contemporary Art and The Queens Museum as well as in publications such as the Boston Globe and The Bay State Banner. He is a recipient of the Donor Circle for the Arts and the NEFA Creative City grants.

To screen the film before the talk back, please make sure you register for the film screening. The film will be available for viewing on Friday, April 9th at 6pm until the live talkback on Saturday, April 10th at 6pm. Registration is required for both events. Log-in information will be emailed upon receipt of your registration.

About the director: Daniel Callahan is multimedia artist, filmmaker and designer. His work merges various disciplines including but not limited to sound, video, painting, collage, photography, and performance to create immersive experiences that seek to transcend medium and bridge the gap between the mundane and metaphysical. His directorial debut “Come On In” is a feature-length psychological drama film which he wrote, co-produced and stars.

Daniel is a graduate of the Pennsylvania School of Design, where he received the Fine Arts Chair Award, and Emerson College where he received his Masters in Fine Arts in Film and Video. His work has been exhibited in the Museum of Fine Arts, The Isabella Stewart Gardner Museum and the Institute of Contemporary Art and has been featured in such publications as Believer Magazine, The Bay State Banner, and Words Beats & Life: The Global Journal of Hip-Hop Culture. He is a recipient of the Donor Circle for the Arts Grant and the NEFA creative city grant, as well as the newly elected president of the Roxbury Cultural District.

You're not going yet!

Buy Tickets
This event content is powered by the Localist Community Event Platform.