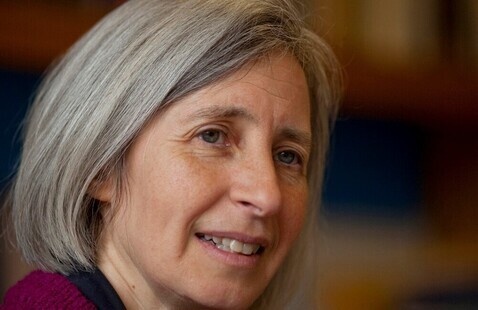 Please join us on December 3, from 10–11am (Eastern) for a talk by Professor Martha Minow, Harvard Law School, as part of the “Information, Algorithms, and Justice” speaker series. Professor Minow will present on her current research in a talk entitled “Saving the News: Addressing Digital Disruption and the Future of Journalism.”

This event is free and open to the public, but registration is required. RSVP here.

Following her talk, Professor Minow will engage with three discussants from the Northeastern community: Meredith Clark, Associate Professor in the College of Arts, Media and Design and Founding Director of the Center for Communication, Media Innovation and Social Change; Brooke Foucault Welles, Associate Professor in the Department of Communication Studies; and James Hackney, Dean and Professor of Law. Finally, there will be time for a Q&A with attendees.

The First Amendment of the US Constitution assumes the existence and durability of a private industry, but across the United States, private news reporting and distribution is disrupted, declining, and swamped by misinformation. The federal government has contributed financial resources, laws, regulations, and at times inaction to develop and shape media from postal subsidies to the internet. New steps to support and amplify journalism can and should be pursued—and are not foreclosed by the First Amendment—and even may be demanded if rights surrounding press and speech are to persist in the 21st century. In addition to these arguments, this talk will identify three kinds of initiatives, with concrete examples.

Martha Minow is the 300th Anniversary University Professor at Harvard University where she has taught at Harvard Law School since 1981, where she served as dean from 2009-2017.  Her courses include advanced constitutional law; fairness and privacy; family law; international criminal justice; law and education; and law, justice, and design. An expert in human rights, constitutional law, and advocacy for members of racial and religious minorities and for women, children, and persons with disabilities, she also writes and teaches about media policy, privatization, technology and ethics, military justice, and ethnic and religious conflict. She is the author of many scholarly articles and books, including Saving the News (June 2021) When Should Law Forgive? (2019);  In Brown’s Wake: Legacies of America’s Constitutional Landmark (2010); Between Vengeance and Forgiveness: Facing History After Genocide and Mass Violence (1998); and Making All the Difference: Inclusion, Exclusion, and American Law (1990).

We will be including automated live captioning during the event. To make space for informal discussions, this event will not be recorded for public distribution.

NULab for Texts, Maps, and Networks

Is this a public event? Yes/No