“How do I start my novel?” Lunch & Learn with Author Paul Murray 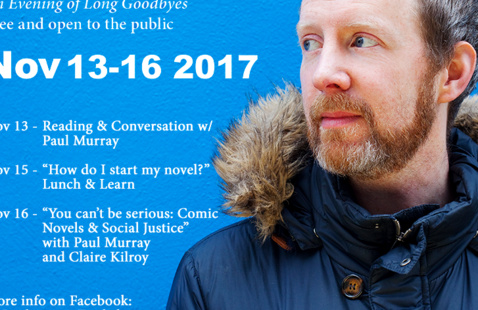 Egan Research Center, Amphitheatre View map Free Event
Add to calendar
Save to Google Calendar Save to iCal Save to Outlook

https://www.northeastern.edu/cssh/english/event/2017-vdw-paul-murray/ #nuvdwseries
View map Free Event
Add to calendar
Save to Google Calendar Save to iCal Save to Outlook

Free and open to the public. Join us for a public skills workshop with Visiting Distinguished Writer Paul Murray, author of An Evening of Long Goodbyes,  Skippy Dies, and The Mark and the Void.

Paul Murray studied English literature at Trinity College in Dublin and creative writing at the University of East Anglia. His first novel, An Evening of Long Goodbyes, was short-listed for the Whitbread Prize in 2003 and was nominated for the Kerry Irish Fiction Award. His second novel, Skippy Dies, was short-listed for a 2010 Costa Book Award and long-listed for the 2010 Man Booker Prize, was a finalist for the National Book Critics Circle Award, and was ranked number three in Time's ten best books of 2010. His latest novel, The Mark and the Void, was one of Time's top ten best fiction books for 2015, and joint winner of the Bollinger Everyman Wodehouse Prize in 2016.

Free and open to the public.