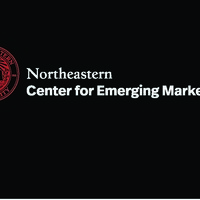 DEMOCRACY IN INDIA: ACHIEVEMENTS AND DEFICITS Ashutosh Varshney is Sol Goldman Professor of International Studies and the Social Sciences and Professor of Political Science at Brown University, where he also directs the Center for Contemporary South Asia.  Previously, he taught at Harvard and the University of Michigan, Ann Arbor. His books include Battles Half Won: India’s Improbable Democracy, Ethnic Conflict and Civic Life: Hindus and Muslims in India, Democracy, Development and the Countryside: Urban-Rural Struggles in India, and India in the Era of Economic Reforms. His honors include the Guggenheim and Carnegie fellowships and the Gregory Luebbert Prize.  He is a contributing editor for The Indian Express, and his guest columns have appeared in many other newspapers, including the Financial Times.  He is editor of the Modern South Asia Series, published by Oxford University Press, New York.

The Center for Emerging Markets at Northeastern University