Asia, America, and the World: The Chinese Question: The Gold Rushes and Global Politics 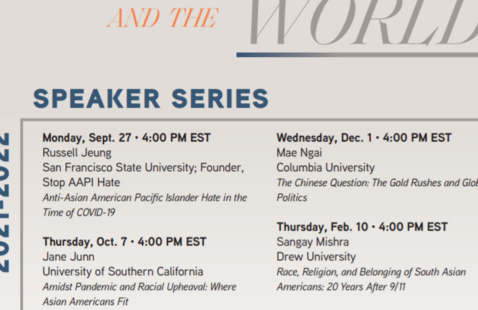 You are invited to join the Northeastern University Asian Studies Program for the fourth speaker in the series, Dr. Mae Ngai, who will be giving the talk "The Chinese Question: The Gold Rushes and Global Politics." Mae Ngai is Lung Family Professor of Asian American Studies and Professor of History, and co-director of the Center for the Study of Ethnicity and Race at Columbia University. A U.S. legal and political historian interested in questions of immigration, citizenship, and nationalism, she is author of the award-winning Impossible Subjects: Illegal Aliens and the Making of Modern America (2004); The Lucky Ones: One Family and the Extraordinary Invention of Chinese America (2010); and The Chinese Question: The Gold Rushes and Global Politics (2021). She has received fellowships from the Guggenheim Foundation, the Institute for Advanced Study, and the Library of Congress, among others. Ngai has written on immigration history and policy for the Washington Post, New York Times, Los Angeles Times, The Altantic, and the Nation. Before becoming a historian she was a labor-union organizer and educator in New York City, working for District 65-UAW and the Consortium for Worker Education. She is now writing Nation of Immigrants: A Short History of an Idea (Princeton University Press).

This new, university-wide series is called Asia, America and the World. The recent upsurge in anti-Asian violence and bigotry in the wake of the COVID-19 pandemic has attracted renewed attention on a long-standing problem. This inaugural series invites a diverse slate of scholars from different disciplines—history, sociology, political science, and anthropology—to address critical issues confronting Asian American communities from a global or transnational perspective. The series is part of Northeastern University President Joseph Aoun’s Action Plan exploring ways to bring Asian American Studies to Northeastern.