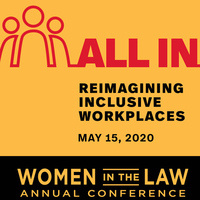 Women in the Law Conference

The twelfth annual Women in the Law Conference will take place on Friday, September 25, 2020, at Northeastern University School of Law.

This conference provides career guidance and professional development growth to women attorneys and other professionals at all stages of their careers and brings together powerful decisionmakers from Massachusetts, Alaska, Canada, California, Illinois, New York, Washington, DC, and beyond.

We emphasize practical, useful information to take away from the full day's programming to further develop your career.

Michele Coleman Mayes is vice president, general counsel and secretary for the New York Public Library (2012 – present). She previously held the position of general counsel for Allstate Insurance Company (2007-2012) and Pitney Bowes Inc. (2003-2007). Ms. Mayes served on the Presidential Commission on Election Administration from 2013-2014. She was chair of the Commission on Women in the Profession of the American Bar Association from 2014-2017. In 2015, she became a fellow of the American College of Governance Counsel. In August 2016, she was elected to the Board of Directors of Gogo Inc. (NASDAQ: GOGO).  She is a sought after speaker on the topic of diversity and inclusion.  She is co-author of the book Courageous Counsel: Conversations with Women General Counsel in the Fortune 500.

Shana Knizhnik is a staff attorney at the Legal Aid Society of New York City’s Criminal Defense Practice. Previously, she was a legal fellow at the ACLU of the District of Columbia.