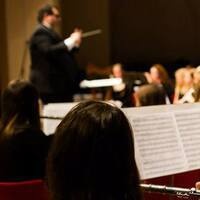 Guillaume Dufay (c. 1397-1474) was one of the great composers of the early Renaissance in Europe. His “Gloria” features two trumpets playing antiphonal fanfares and a two-part stretto canon sung to the liturgical text.

Gwynneth Walker (b. 1947) from New Canaan, Connecticut writes in a style that is expressive and accessible. She has said, "My pieces always have melody and form and a rhythm that’s right there for you." Her setting of "i thank You God" captures the transcendental joy of e. e. cummings’s well-known poem.

Kenneth Lampl (b. 1964), now Head of the Australian National University School of Music, was born in New York and has achieved a reputation as a prolific composer of music for both films and choruses. In 2015 Lampl was a visiting composer at Northeastern when we performed his “Adon Olam.” The mystical “Dirshu,” his most recent choral composition, was written jointly with his wife, Kristen.

David Fanshawe (1942-2010) was a British ethnomusicologist and composer. In 1969 he set off on a three-year journey down the Nile River in Africa, recording the tribal chants that he encountered. In 1972 he composed African Sanctus, combining his own powerful music with the recordings that he had collected in Africa.

Nick Page (b. 1952) is a well-known Bostonian composer, conductor, arranger, folksinger and song-leader. His “Honey in the Rock” is based on a rousing spiritual from South Carolina.

The oratorio Messiah is the best known and most performed work by British composer George Frideric Handel (1685-1759). We will perform the first movement, which chronicles the story of the birth of Jesus, and conclude with the popular “Hallelujah Chorus.”

The 100-voice Northeastern University Chorus and select Chamber Chorus will be joined by the Boston Landmarks Orchestra.

Located on the corner of St. Stephen Street and Gainsborough Street