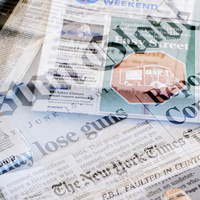 Go inside the nation’s newsrooms as they cover the midterm elections and gear up for 2020. Guest speakers from political campaigns and advocacy groups will join reporters and editors from The Boston Globe, The New York Times, The Wall Street Journal, CNN, NPR, Fox News, and BuzzFeed.

Is the media riddled with #fakenews or is the Trump Administration overreaching in its effort to control and influence the press? How do CNN and NPR, Fox News and the Washington Post, Buzzfeed and the Boston Globe decide what to report? How do politicians, the Koch Brothers and “the resistance” all try to influence what we read and watch—and how successful are they?

The midterm elections will throw the future of America’s agenda into sharp relief—not just who will control the House and the Senate but what to do about inequality, education, the environment, crime, the growth of cities like Boston, women’s rights, discrimination, and the #metoo movement. Is compromise possible on immigration? In the Middle East? How should the U.S. respond to the rise of China, and the threat of North Korea?

Led by Pulitzer Prize winning reporter and director of Northeastern University’s School of Journalism Jonathan Kaufman and Dukakis Center head Theodore Landsmark, the Myra Kraft Open Classroom will feature top editors and reporters from around the country as well as advocates and expert professors giving an inside view of these increasingly turbulent times.

Confirmed media speakers include top editors and reporters from the Boston Globe, ProPublica, Bloomberg News, CNN, and WBUR. Topics will include:

School of Public Policy and Urban Affairs and School of Journalism