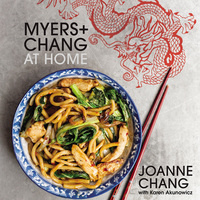 Myers+Chang at Home by Joanne Chang

Recipes from the Beloved Boston Eatery

From beloved chef and author Joanne Chang, the first cookbook from her acclaimed Boston restaurant, Myers+Chang

Award-winning and beloved chef Joanne Chang of Boston’s Flour bakery may be best known for her sticky buns, but that’s far from the end of her talents. When Chang married acclaimed restaurateur Christopher Myers, she would make him Taiwanese food for dinner at home every night. The couple soon realized no one was serving food like this in Boston, in a cool but comfortable restaurant environment. Myers+Chang was born and has turned into one of Boston’s most popular restaurants, and will be celebrating its 10th anniversary in 2017, just in time for publication of this long-awaited cookbook. These are recipes to be shared, always bursting with flavor, and anyone can make them at home–Dan Dan Noodle Salad, Triple Pork Mushu Stir-fry, or Grilled Corn with Spicy Sriracha Butter. This is food people crave and will want to make again and again. In addition to the favorite recipes, the photography also perfectly captures the spirit of the restaurant, making this book a keepsake for devoted fans.

About Joanne: An honors graduate of Harvard College with a degree in Applied Mathematics and Economics, Joanne Changleft a career as a management consultant to enter the world of professional cooking. She started at Boston’s renowned Biba, then Bentonwood Bakery, Rialto, and New York’s Payard Patisserie and Bistro, and finally Mistral. She returned to Boston with dreams of opening her own pastry shop. In 2000, she opened Flour, a bakery and café, and has since opened six more locations in Boston and Cambridge. Flour has been featured in Gourmet, Food & Wine, Bon Appétit, the New York Times, and Condé Nast Traveler and has received numerous Best of Boston awards. Chang also competed, and won, on Throwdown with Bobby Flay. In 2007, she opened a Chinese restaurant, Myers+Chang, with her husband, Christopher Myers, in the fall of 2007. She is the author of three other cookbooks and was the recipient of a James Beard Award in 2016 for Outstanding Baker in America.

About Karen: Chef Karen Akunowicz is a 2015, 2016, and 2017 James Beard Award finalist for Best Chef Northeast. She is a former competitor on Bravo's Top Chef, and she is currently Executive Chef at Myers+Chang.