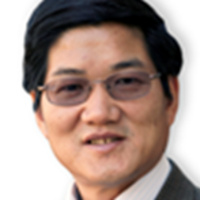 The Department of Mechanical and Industrial Engineering Presents

Abstract: Many applications of materials require the growth of thin films on a substrate. It is known that the interface between an epitaxial film and a substrate is coherent when a film thickness is small, i.e. below the critical thickness for nucleation of interfacial dislocations. This presentation will discuss the applications of fundamental thermodynamics and phase-field simulations to predicting phase transitions, domain structures, and properties of ferroelectric thin films. Examples to be discussed are drawn from recent collaborations with numerous experimental groups on oxide film growth and characterizations, including PbTiO3, PbxZr1-xTiO3(PZT), BaTiO3, BiFeO3 and superlattices. It is shown that ferroelectric transition temperatures in thin films can be shifted by hundreds of degrees as compared to the corresponding bulk crystals. It is also demonstrated that strain and electric boundary conditions can drastically modify the domain structures of a thin film as well as its properties such as coercive field, spontaneous polarization, and piezoelectric responses. It will be shown that one can use phase-field simulations to not only help interpret experimental observations but also provide guidance to achieve desirable transition temperatures, specific domain states, and domain wall orientations.