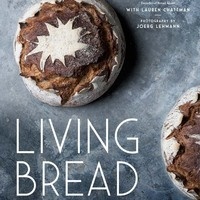 The major new cookbook by the pioneer from Bread Alone, who revolutionized American artisan bread baking, with 60 recipes inspired by bakers around the world.

At twenty-two, Daniel Leader stumbled across the intoxicating perfume of bread baking in the back room of a Parisian boulangerie, and he has loved and devoted himself to making quality bread ever since. He went on to create Bread Alone, the now-iconic bakery that has become one of the most beloved artisan bread companies in the country. Today, professional bakers and bread enthusiasts flock to Bread Alone's headquarters in the Catskills from all over the world to learn Dan's signature techniques and baking philosophy.

But though Leader is a towering figure in bread baking, he still considers himself a student of the craft, and his curiosity is boundless. In this groundbreaking book, he offers a comprehensive picture of bread baking today for the enthusiastic home baker. With inspiration from a community of millers, farmers, bakers, and scientists, Living Bread provides a fascinating look into the way artisan bread baking has evolved and continues to change--from wheat farming practices and advances in milling, to sourdough starters and the mechanics of mixing dough. Influenced by art and science in equal measure, Leader presents exciting twists on classics such as Curry Tomato Ciabatta, Vegan Brioche, and Chocolate Sourdough Babka, as well as traditional recipes. Sprinkled with anecdotes and evocative photos from Leader's own travels and encounters with artisans who have influenced him, Living Bread is a love letter to the practice of making "good bread" and a cutting-edge guide.

About the Author: Daniel Leader was one of the first champions of artisanal bread baking in this country; he founded Bread Alone Bakery in New York's Hudson Valley in the early 1980s. Now a classic, Leader's "Bread Alone", won the IACP award for best baking book in 1994. In 2008, Leader won his second IACP award for Local Breads. Dan has published 2 more books Simply Great Breads and Panini Express. Dan continues to run his bakery Bread Alone and Bread Alone products are sold across 4 states and found in Farmers markets and fine grocers.