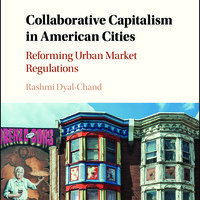 Join us for a lively discussion about Professor Rashmi Dyal-Chand's new book.

In many American cities, the urban cores still suffer. Poverty and unemployment remain endemic, despite policy initiatives aimed at systemic solutions. In Collaborative Capitalism in American Cities: Reforming Urban Market Regulations, Professor Rashmi Dyal-Chand focuses on how businesses in some urban cores are succeeding despite the challenges.

Using examples of urban collaborative capitalism, Dyal-Chand extrapolates a set of lessons about sharing. "Sharing can allow American businesses to remain competitive while returning more wealth to their workers, and this more collaborative approach can help solve the problems of urban underdevelopment and poverty," says Dyal-Chand, who served as an associate general counsel of The Community Builders, Inc., a nonprofit affordable housing developer, prior to joining academia.

According to Joseph William Singer, Bussey Professor of Law at Harvard Law School and author of No Freedom Without Regulation: The Hidden Lesson of the Subprime Crisis, the book is, "an eye-opening exploration of how cooperation might temper the harshness of economic competition and reverse our slide into inequality while restoring a measure of economic stability to the many who have lost it in recent years."

Light Refreshments will be served
.
Sponsored by the Faculty Colloquium