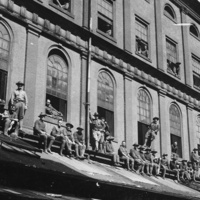 Commemorating the Centennial of the 1919 Boston Police Strike

Join the Northeastern University Archives and Special Collections in welcoming Joanne Riley, Interim Dean of University Libraries at the University of Massachusetts Boston. Riley will present on the work of The 1919 Boston Police Strike Project, a collaborative crowd-fueled research project between the Boston Police Department Archives, the University of Massachusetts Boston, the Boston City Archives, volunteer researchers, and family members of strike participants.

The 1919 Boston Police Strike Project aims to document and preserve the stories of the more than 1,130 officers who were involved in this highly influential labor strike, which had lasting effects in the City of Boston and across the United States. For more information, visit blogs.umb.edu/bpstrike1919.

This event is free and open to the public. Lunch will be served.