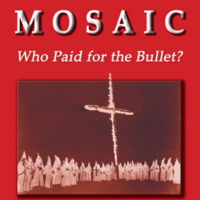 Book Event: A Celebration of Professor Michael Melsner's New Novel, Mosaic: Who Paid for the Bullet?

Porter Square Books in Cambridge, Mass., will host an author event in celebration of Professor Michael Meltsner's new novel, Mosaic: Who Paid for the Bullet? on Thursday, May 26.

Professor Meltsner will be joined in conversation by Professor Daniel Medwed.

A life-changing true crime story, Mosaic brings to life the compelling story of the 60s murder of a charismatic woman doctor who courted danger trying to dismantle a racially segregated healthcare system in a large southern city. The search for who ordered the killing takes civil rights lawyer Christopher North to the centers of power, where a government intervention goes deadly wrong. It also forces him to confront the meaning of revenge-she wasn't just a client to him-for a crime that occurs at the intersection of hate and greed.

“Michael Meltsner's hot exploration of a cold murder case is a gripping who-done-it, accompanied by brilliant insights into racial neuroses of all varieties. His nonfiction expertly describes race in the law; here, his fiction deftly probes mysteries of race in the mind and heart. I found Mosaic a fascinating read.”
- Randall Kennedy
Professor, Harvard Law School

“Meltsner, one of the most important civil rights lawyers in American history, masterfully blends fact and fiction in this page-turning account of a doctor's courageous quest to expose racism at an Alabama hospital."
- Evan Mandery
Emmy and Peabody Award Winning Author of the Novel Q

“Meltsner, master of fiction, litigation, and memoir, tells a fascinating, disturbing story that takes us deep inside the federal civil rights bureaucracy - not your usual murder scene. Set in a southern city in the 1960s, the murky, haunting tale reaches beyond the customary tropes about race, class, and crime to illuminate an America few of us know about. Compellingly written, it's instructive, searing, complex, and exceptionally relevant to our ongoing encounters with our recent racial past.”
- Professor Margaret Burnham
Founder and Director of Northeastern Law’s Civil Rights and Restorative Justice Project

“A richly woven tapestry of plot and personality, historical reality and rich imagination, hard-boiled crime story, and scathing cultural critique. Its painting of the landscape of the mid-60s South, North, civil-rights activists, and their legal supporters is flawlessly authentic. Its characters true to life but drawn as only the best of fiction can - iconic in their stature yet complex and idiosyncratic to the core. As his heroine declares: 'All lives are jagged.' But nothing else is jagged in this fast-paced, seamless, exhilarating read.”
- Anthony Amsterdam
University Professor Emeritus, New York University Law School

“I couldn't put this book down, caught by a riveting plot and the echoes of a far-off news story I had been curious about. A brave woman physician is brutally murdered in the South. Meltsner has beautifully captured the mood of lonely melancholy necessary to tell this story.”
- Jacqueline Olds, MD
Author of The Lonely American and Associate Professor of Psychiatry, Harvard Medical School

Hired by Thurgood Marshall, Michael Meltsner argued major civil rights cases for the NAACP Legal Defense Fund and authored Cruel and Unusual, the widely praised history of the attack on the death penalty. Winner of many awards including a Guggenheim and an American Academy of Berlin Prize fellowship, he teaches constitutional law at Northeastern University School of Law.

Daniel S. Medwed is university distinguished professor of law and criminal justice at Northeastern University School of Law. A renowned innocence advocate, he is the author of Prosecution Complex: America’s Race to Convict and Its Impact on the Innocent. He lives in Cambridge, Massachusetts.